The MOPITT (Measurements of Pollution In The Troposphere) instrument measures up welling radiation in three narrow infrared (IR) bands: 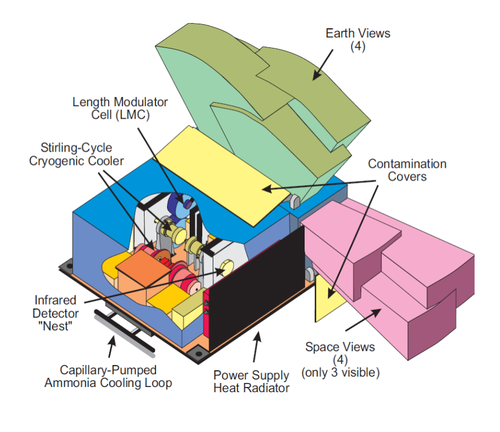 The MOPITT instrument makes use of the principle of correlation spectroscopy whereby a cell of the gas to be measured is used as an optical filter in the infrared to measure the signal from the same gas in the atmosphere. The amount of gas in the instrument cell is modulated by varying either the cell's pressure, for a Pressure Modulated Cell (PMC), or its length, for a Length Modulated Cell (LMC). MOPITT utilizes an array of correlation radiometer channels such that the thermal channels (4.7 μm) are most sensitive to upper and mid-tropospheric CO and the solar channels (2.3 μm) are most sensitive to the total CO column. Major features of the electromagnetic energy received by the instrument are the absorptions and emissions by the atmospheric constituents at their distinctive spectral lines. For each measurement, a correlation gas modulator takes two samples by alternating the amount of the absorbing gas in the correlation cell between two states. Changes occur only in the target gas absorption lines. For the rest of the spectrum, including other contaminating gas absorption lines, the absorption is essentially unchanged. The difference of the two states leaves only the changes at the correlation gas absorption lines and eliminates other components because they are not modulated between the two samples.

The MOPITT instrument layout can be seen in the figure below. This design achieves an optimal combination of LMCs and PMCs, thermal and solar channels, carbon monoxide and methane gases as well as allowing significant redundancy. It is comprised of 8 channels: channel 1 to 4 are referred to as side B and channels 5 to 8 are referred to as side A. Side A and side B, although not perfect duplicates, are redundant to each other in the sense that one side can perform approximately the same function as the other side with some performance degradation. The detectors for each side are cooled by two separate coolers. 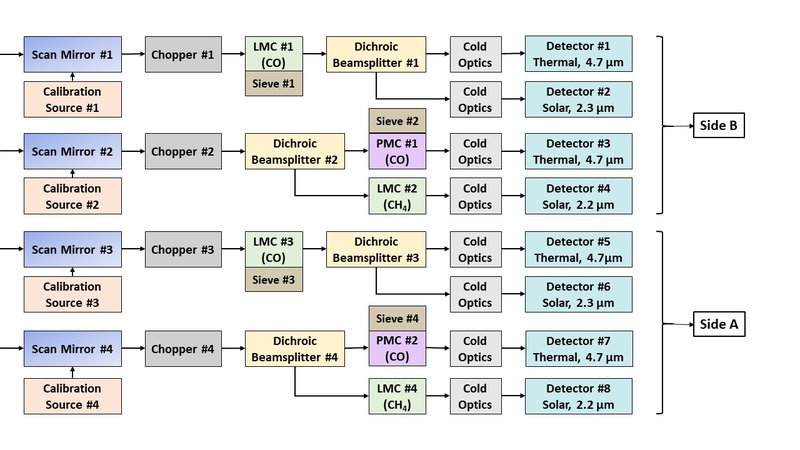 More information about the concept and operation principles of MOPITT can be found at the NCAR MOPITT website.