A complete list of publications related to MOPITT can be found on our Zotero library.

If you are aware of any missing items please contact us to let us know.

Further lists of publications related to MOPITT can be found on the NCAR website, or from the Canadian Space Agency here.

In this section a few of the University of Toronto publications will be introduced. Summary: The MOPITT (Measurements Of Pollution In The Troposphere) instrument, aboard the Terra spacecraft, has been providing continuous measurements of carbon monoxide (CO) total columns and vertical profiles on a global scale since shortly after the launch of Terra on December 18, 1999. At the time of its launch, MOPITT was one of the first correlation radiometer instruments, utilizing a combination of Length Modulating Cells (LMCs), Pressure Modulating Cells (PMCs), and Stirling cryocoolers to observe tropospheric CO from space. At the present time, MOPITT is the only space-borne correlation radiometer instrument that measures atmospheric CO in current operation. After over 20 years of operation, an overview of the engineering telemetry of MOPITT allows for significant insight into the performance and successes of one of the longest operating satellite instruments in the space environment. This work focuses on the engineering telemetry of MOPITT’s core subsystems, with emphasis on their relation to MOPITT’s long-term successes. Particular focus is placed on how the instrument successes, including (1) achieving an extremely stable thermal and vibrational environment; (2) allowing for compensation of subsystem failures and anomalies by means of a redundant design; and (3) maintaining stable detector performance, have all contributed to MOPITT becoming the longest living operational instrument for measuring atmospheric CO columns and profiles. Analysis of improvements in MOPITT observational coverage over Canada

Summary: MOPITT has been measuring global tropospheric carbon monoxide (CO) since March 2000, providing the longest nearly continuous record of CO from space. Over time, the data processing algorithms have been updated to improve the quality of CO retrievals and the sensitivity to the lower troposphere. Currently, MOPITT retrievals are only performed for clear-sky observations or over low clouds for ocean scenes. The cloud detection scheme was modified in the new V9 product, resulting in an improvement in observational coverage, especially over land. Comparison of the spatial and seasonal variations of the data coverage in V9 and V8 shows differences with significant geographical and temporal variability, with some regions such as Canada and the Amazon exhibiting a doubling of data in winter. Here we conducted an analysis of Moderate Resolution Imaging Spectroradiometer (MODIS) cloud heights and cloud mask products along with MOPITT retrieval cloud flag descriptors to understand the impact of cloud conditions on the MOPITT observational coverage, with a particular focus on observations over Canada. Analyses of the standard V8 CO TC product (cloud filtered) and nonstandard product (non-cloud-masked) were conducted for selected days. Results showed some coherent structures that were observed frequently in the non-masked CO product that was not present in the V8 product and could potentially be actual CO features. The MODIS cloud height analysis revealed that a significant number of low-cloud CO retrievals were discarded in the V8 product. Most of the missed CO plumes in the V8 product are now detected in the new V9 product as a result of the dependence of the MOPITT radiance ratio (MRT) test over land. Comparisons of the MRT and MODIS cloud height data indicate a remarkable negative correlation. As a result of the modified V9 cloud detection algorithm, a significant portion of the low-cloud CO retrievals is now incorporated in the new V9 MOPITT product. Consequently, the observational coverage over Canada is significantly improved, which benefits analyses of regional CO variability, especially during extreme pollution events. We also conducted a comparison of MOPITT and IASI CO TC and found generally good agreement, with about a 5-10 % positive bias that is more pronounced in highly polluted scenes. Summary: Atmospheric carbon monoxide (CO) concentrations have decreased since the beginning of the century, and the rate of decrease depends on the region. Depending on how regions are chosen, their boundaries may not always align with where there are differences in trends. To address this, we calculate trends within 0.4° × 0.4° grid cells independently throughout the globe using satellite CO retrievals from the Measurements Of Pollution In The Troposphere (MOPITT) satellite instrument from 2002 to 2017. These trends are found with the caveat that there are large singular biomass burning events somewhere nearly every year, and we include examples of large column CO anomalies during sporadic but large burning events in the North American and Eurasian boreal forests, the Amazon, Africa, and Indonesia. CO trends behave similarly within regions that span about a few thousand kilometers. Using TransCom region definitions, we find average trends between −0.9 and 0.1 ppb year−1 (about −0.9 to 0.1% year−1) for 2002–2017. Over 5-year subsets, trends in TransCom regions vary between −3.6 and 1.8 ppb year−1. This substantial spatial and temporal variability in trends is in agreement with other studies. With an understanding of regional trends, we compare with trends from urban areas. Generally, CO trends within urban areas are indistinguishable from regional trends. This may be because of a combination of noise in the data, the large footprint for MOPITT, or because anthropogenic CO reduction measures were implemented before the MOPITT record began. We provide case studies for a few cities, such as Los Angeles, and find long-term variation in the rate of change of column CO. 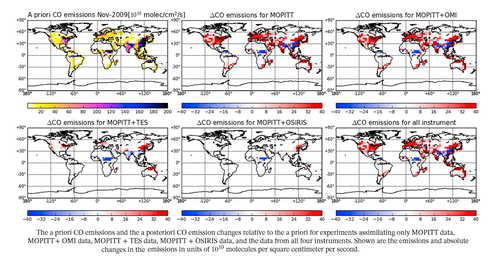 Summary: The GEOS-Chem four-dimensional variational data assimilation system was used to estimate emissions of carbon monoxide (CO) and nitrogen oxides (NOx) in November 2009 and July 2010. We assimilated CO retrievals from MOPITT, ozone retrievals from the TES and OSIRIS and Nitrogen Dioxide columns from OMI. By assimilating data for multiple chemical species with the four-dimensional variational scheme we obtain a consistent chemical state over the assimilation period. The modeled ozone bias was reduced to less than 3.5 ppbv everywhere, relative to independent aircraft ozone data, except in the high-latitude upper troposphere and lower stratosphere. We found that in November, the CO and NOx emission estimates obtained with the multiple species assimilation were generally comparable to those inferred from assimilating only MOPITT or OMI data, respectively, whereas in July the differences were larger. For the main anthropogenic source regions, the inferred North American and European emissions responded most strongly to the multispecies information in the assimilation. In July, North American and European CO emission estimates differed by 31% and 65% relative to the MOPITT-only estimates, respectively. We also found large differences for the North American and European NOx emission estimates, which differed by 27% and 16% relative to the OMI-only estimates, respectively. Our results highlight the potential benefit of exploiting the additional constraints offered by multispecies chemical data assimilation.

Summary: In the MOPITT data, large horizontal gradients in CO, coherent at the synoptic scale, have been observed. The concentration of CO varies rapidly by as much as 50–100% across distances of ∼100 km, forming distinct boundaries in the CO distribution. These can last one to several days and span horizontal distances of 600–1000 km. On average, such events were observed in the MOPITT CO daily images once every 3–4 days over North America in spring and summer 2000. It was found that the large horizontal gradients typically reflect the differential vertical and horizontal transport of air with different chemical signatures. The results demonstrate that MOPITT can capture the influence of synoptic processes on the horizontal and vertical distribution of CO. The large gradients in CO observed on synoptic scales represent valuable information that can be exploited to improve our understanding of atmospheric CO. In particular, these results suggest that the MOPITT observations provide a useful data set with which to address a range of issues from air quality on local/regional scales to long‐range transport of pollution on continental/global scales. 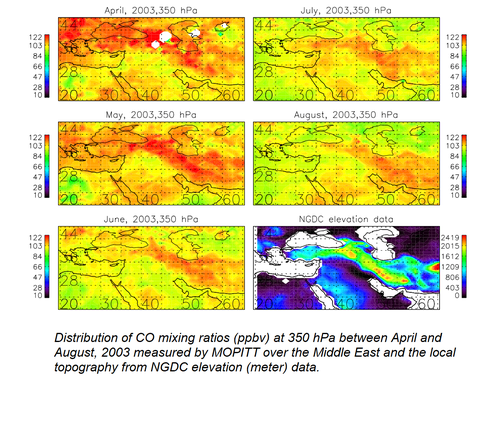 Carbon monoxide (CO) maximum over the Zagros mountains in the Middle East: Signature of mountain venting?

Summary: Enhanced CO is observed over the Zagros mountains of Iran, following the local topography over this region (25–40N, 40–60E). The MOPITT averaging kernels do not seem to indicate any data artifacts in this area. We argue that this feature likely forms by the process of mountain venting by thermal winds caused by strong daytime differential heating. This is consistent with an analysis of vertical velocity in the NCEP reanalysis data in this region. The phenomenon was observed in all the years of available MOPITT measurements and may have implications for the pollution episodes in the region and the Middle East ozone maximum that has been observed earlier. 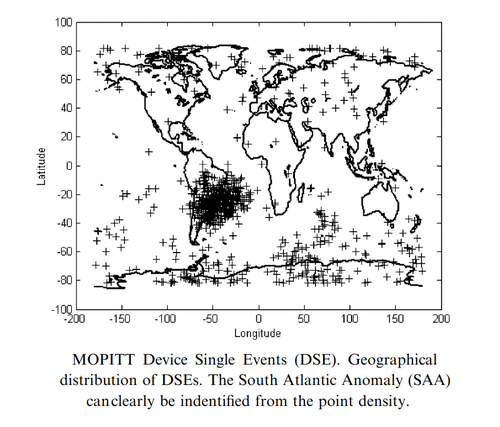 Summary: This paper reports on Device Single Events (DSEs) occurring in the Measurements Of Pollution In The Troposphere (MOPITT) space instrument piezoelectric accelerometers. It is found that DSEs correlate with the radiation environment, solar activity and high intensity Solar Proton Events. Summary: Vertical profiles of carbon monoxide (CO) mixing ratio retrieved from MOPITT measurements have been analyzed. It was find that variations in the vertical structure of CO can be detected in the MOPITT data. The Asian summer monsoon plume in CO is observed for the first time as a strong enhancement of CO in the upper troposphere (UT) over India and southern China indicating the effect of deep convective transport. Similarly, zonal mean height latitude cross‐sections for the months of September–December, 2002 indicate deep convective transport of CO from biomass burning in the southern tropics. These findings show that MOPITT CO can provide valuable information on vertical transport phenomena in the troposphere.